Background: It was reported that Peripheral Benzodiazepine Receptors (PBRs) agonists as diazepam possesses immunomodulatory and anti-inflammatory activities that suppress inflammation.

Aim of the study: This study aims to investigate the anti-inflammatory effects of diazepam on the different inflammatory responses in the rats with exploring the possible underlying mechanisms.

Methods and animals: 88 Albino rats used in acute and chronic inflammatory study of carrageenan–induced inflammatory paw edema of the rats (CIPE), and Freund’s adjuvant induced polyarthritis in rats respectively. Tested rat groups in both models received diazepam (I.P). Bilateral adrenalectomy was done in some rat groups of acute and chronic models as reference groups to diazepam treated groups with intact adrenals glands, and indomethacin was used as a reference anti-inflammatory agent in acute and chronic models of inflammation. The hind paw thickness and plasma Nitric Oxide (NOx) were assessed in each sub-groups of acute inflammatory response. The chronic inflammatory response was assessed by measuring the paw thickness, serum C-reactive protein, serum albumin and serum corticosterone of these arthritic rats.

Results: Diazepam significantly reduced the increase in the paw thickness as well as NOx levels compared to other groups of acute study. Administration of diazepam for arthritic rats significantly decreased paw thickness, reduced increase in C-reactive protein, increased serum albumin, and increased serum corticosterone in comparison to administration of indomethacin to the arthritic rats. Diazepam had no any inhibitory anti-inflammatory actions on paw edema thickness, and on others measured serum biochemical when administrated to adrenalectomized rats in both acute and chronic inflammatory studies.

Conclusion: Diazepam through enhancement of activity of genes responsible for synthesis of corticosterone via its stimulatory action on Peripheral Benzodiazepine Receptors (PBRs) in adrenal glands and modulating activity of immune cells could be of high pharmacological interest as a potential anti-inflammatory agent.

Inflammation is a pathological series of protective responses generated by the host in response to infection or any other insults [1]. Inflammatory events are initiated, and coordinated by the actions of various chemical mediators. There are several body cell types, such as mast cells, platelets, and leukocytes are responsible for the release of inflammatory mediators and chemicals; that play an important role in the development of inflammation. The elevated levels of cytokines and chemokines can promote and amplify the inflammatory response [2]. These cytokines and chemokines are generally proteins, in addition to the low-molecular weight lipids derived from arachidonic acid, are playing an important proinflammatory role. In addition to this, gases like nitric oxide and carbon monoxide are recognized also as inflammatory mediators [3]. Experimental and clinical evidences suggested that benzodiazepines could influence immune cell properties, such as phagocyte activity, chemotaxis and the production of superoxide, and cytokines; either by reducing the stress and anxiety or through stimulation of Peripheral Benzodiazepine Receptors (PBRS) [4]. These PBRS have been identified mainly into the mitochondria of non-neuronal peripheral cells as adrenocortical cells [5] and also, in the cellular components of the immune system, such as monocytes, neutrophils, macrophages [6].

Ligands of PBRs have been found to regulate activity of genes responsible for biosynthesis of cholesterol derivatives as corticosterone modulate monocyte functions such as chemotaxis [7,8]. Also, these ligands have been reported to suppress the production of IL-1, IL-2, IL-6, TNF-α, IFN-γ, and to increase glucocorticoid production [9]. Therefore, this study aims to investigate the possible anti-inflammatory effects of the diazepam on acute and chronic inflammatory responses in the rats with exploring the possible underlying mechanisms involved in these anti-inflammatory actions.

Chemicals and drugs: Were used in the study

Acute experimental models of inflammation: Carrageen induced acute paw edema in rats: Forty rats of both sexes, weighing about 200-250 g each were used in this experiment; the hind paw edema was induced by sub-plantar injection of 0.1 ml of 1% sterile carrageenan suspension in normal saline into one of the hind paws of the rat while the other contralateral hind paw of the rat was injected with 0.1 ml of sterile normal saline solution according to Winter et al. [10].

2) Blood samples: Rats were sacrificed and blood was collected for measurement of the following parameters:

A) Acute phase proteins as C-reactive protein and serum albumin.

C) Determination of Nitric Oxide (NO): Nitric oxide was determined in the plasma by measuring NO metabolites (NOx) based on the method of Moshage et al. [16].

Results are expressed as mean ± S.E.M. Differences between two groups are composed by Student's t-test. P<0.05 is considered statistically significant.

A single sub-plantar injection of carrageenan induced an increase in the paw thickness over 24 h. The rat group pretreated with Diazepam had a significantly reduced (p<0.05) an increase in the paw thickness after 24 h with 34.6% reduction of the paw edema as well as NOx level. While rats group pretreated with indomethacin produced 36.88% reduction the paw edema and NOx level. The sub-plantar injection of carrageenan into the right hind paws of the adrenalectomized rats, produced a significant (p<0.05) increase in the right hind thickness over the first 24 h later to carrageenan injection. Diazepam had no any inhibitory effects on the paw thickness as well as NOx level in adrenalectomized+diazepam treated rats (p>0.05) (Figure 2, Histogram 1 and Table 1). 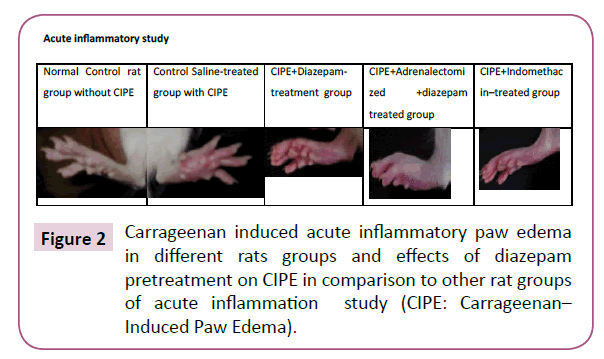 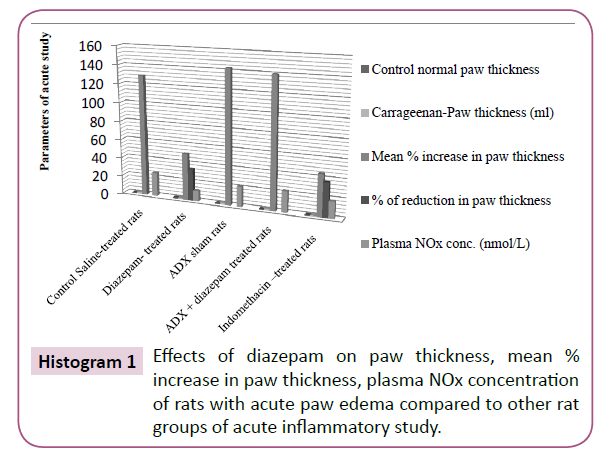 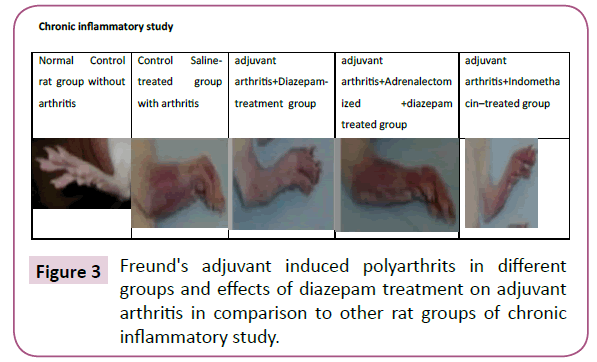 Figure 3: Freund's adjuvant induced polyarthrits in different groups and effects of diazepam treatment on adjuvant arthritis in comparison to other rat groups of chronic inflammatory study. 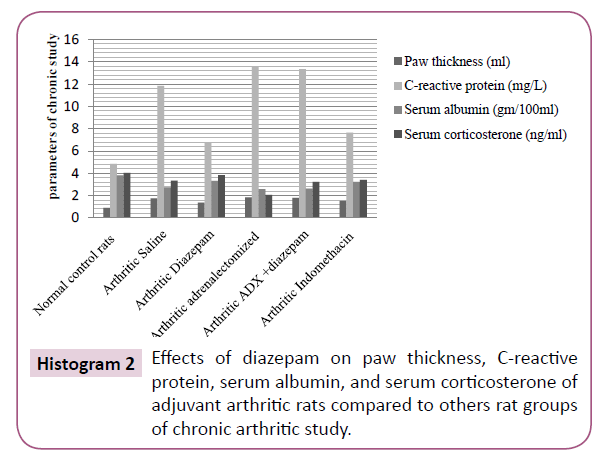 Indeed, cartilage destruction is a major characteristic of rheumatoid arthritis and is linked to aberrant cytokines and growth factor expression in affected tissues [33]. It is well known that, IL-1, IL-6, TNF-α and IFN-γ can affect chondrocytes function [34]. IL-6 has been shown to boost progression from an initial inflammation to a chronic state [35]. Diazepam treatment was found to reduce and to suppress macrophage secretions of IL-1, IL-6 and TNF-α [9]. Also, the PBR ligands as 4'-chloro-diazepam reduces dramatically both IL-6 and IL-13 expression in the pleural exudation of mice injected with carrageenan [18]. Our results were in agreement with results of recent study reported that diazepam and resveratrol, are possessing obvious potential anti-inflammatory effects comparable to that of sulfasalazine on dextran sulphate sodium model of colitis as demonstrated with a significant decrease in serum levels of IL-6, TNF-α, PGE2, increase in serum corticosterone, decrease in colonic rat tissue leucocytes count, MOP, MDA and with a significant marked increase in antioxidant enzymes CAT and SOD in colonic tissues of DSS-induced colitis rat group treated concomitantly with diazepam and resveratrol [36]. The fourth level, a previous study was suggested an important role of NO on the effects of diazepam on CIPE, where these anti-inflammatory effects of diazepam reflect its direct action on the PBRs present in the endothelial cells of the microvascular ambient and/or on immune and inflammatory cells that migrated to the inflammatory site at the rat paw thus, leading to a decrease in NO generation by NO synthase, which leading to a decrease in CIPE [17]. This is consistent with the previous report of Handy and Moore [37], who reported that compounds have the ability to inhibit NO biosynthesis can reduce both phases of carrageenan inflammatory response and thus, may provide a viable targets for the development of novel anti-inflammatory compounds. While in the fifth level [38], was reported that there are functional and biochemical evidence for diazepam as a cyclic nucleotide phosphodiesterase type 4 inhibitor. It was found that inhibition of PDE-4 isoenzyme can elicit some anti-inflammatory effects [39]. The effect of diazepam on phosphodiesterases especially PDE-4 could be also part of the mechanisms involved in some experimental and clinical effects of benzodiazepines which are not well understood. Interestingly, diazepam has some effects such as airway smooth muscle relaxation [40] and hyperglycemia which are shared by PDE-4 inhibitors [41] and also, it is known that diazepam inhibits antigen-induced eosinophil infiltration into guinea-pig conjunctiva [42] as well as, other immune cell functions such as phagocytosis of human polymorphonuclear leukocytes and monocytes or human natural killer cell activity [43]. Lastly at the six levels, it was reported that Calcium Channel Blockers (CCBs) reduce the CIPE in rats and was attributing this anti-inflammatory effect due to stimulation of the HPA axis by CCBs [44]. This is consistent with the report of Schaufele et al. [45] who reported that diazepam is acting through a common mechanism with calcium antagonists, where some of peripheral and central effects of diazepam are thought to be induced by inhibition of adenosine uptake or by inhibiting calcium channels.

The author declares no conflict of interest.